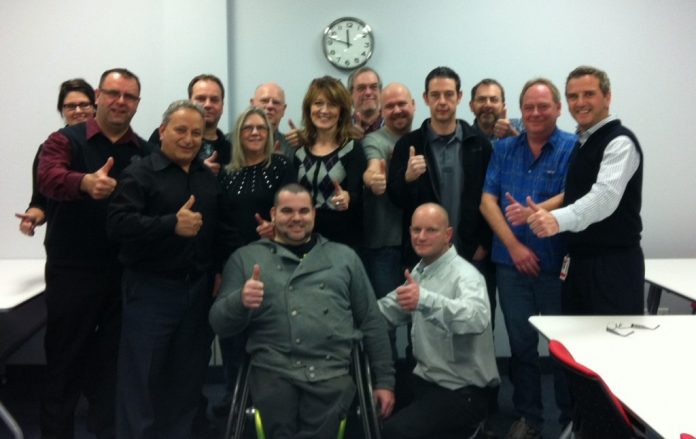 Laval, December 4, 2012 – A dispatcher at Purolator Courier in Montreal and steward of Local Union 931, Érik Desjardins is the first recipient of the “Carol McGregor Canadian Labour Congress Disability Rights Award.” Announced on December 3, the International Day of Persons with Disabilities, the prize recognizes the outstanding contributions of a worker with a disability who has made an impact in the union and/or the community by promoting and defending the rights of persons with disabilities.

The 32 year-old recipient is involved in the workplace, works with young people, plays sports and is active in his community. As a call centre employee with another union, he was willing to lose his seniority a few years ago to take up more challenges and to be involved with the Teamsters. In 2008, he was elected by his peers as shop steward.

He is an excellent leader and communicator; he raises disability awareness and fights for the rights of the disabled. He made sure his own workplace was adapted to his needs and recently had his company build ramps and create handicapped parking spaces.

“He doesn’t see his disability as an obstacle or limitation,” said Teamsters Canada President Robert Bouvier.” He doesn’t even think of it and goes about doing the things he wants to do.”

Purolator helped him get back into competitive sport and is helping him reach his goals. In an interview with Défi sportif, Érik mentioned that Purolator “…is very understanding and respects that I have responsibilities as an athlete. They (the employer) understand that there’s more to life than just work and that sports are important for me to feel fulfilled and to grow. They are giving me the support I need to reach my goals.”

Érik is a positive, upbeat person who is always willing to help and who is also very involved in his community. On several occasions, he has been invited to speak to young people with disabilities to help them push their own limits. As a sledge hockey player, he participated in the 2000 World Championships in Salt Lake City and in the 2004 World Championships in Sweden. He also participated in the 2002 Salt Lake City Paralympics and was a substitute player on the gold-medal team in the 2006 Turin Paralympics.