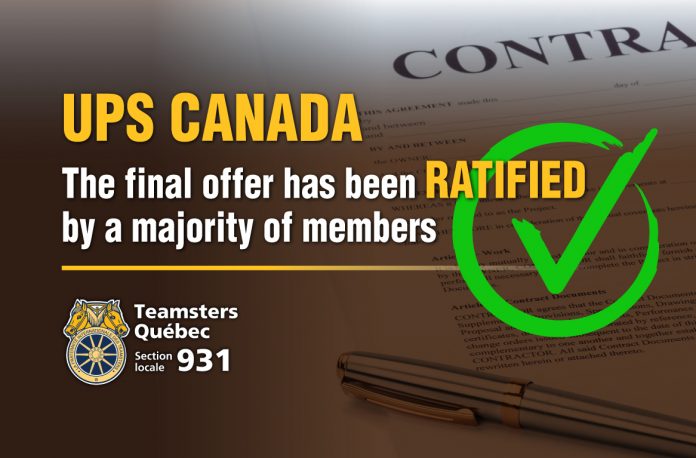 The final offer from UPS has been ratified by 60.8% of Teamster members who voted.

We would like to salute everyone who took part in this important exercise. Being a union member only truly works when we participate, and make our voices heard.

We would especially like to thank and congratulate everyone on the bargaining committee for the long hours they put into these negotiations. These negotiations happened in unprecedented times.

The new contract will improve wage progression for all categories of workers, meaning that some members will receive immediate raises of as much as $2 to $3 per hour. Workers already being paid the top rate will receive a $4.10 raise over the course of the five-year agreement.

These salary increases recognize the backbone and commitment of UPS workers, who have been playing a critical frontline role in the supply chain since the outbreak of the covid-19 pandemic.

Further improvements have been made to the pension plan, to the benefits plan and to hours of work provisions. The policy on facial hair has also been loosened, bringing the company into the 21st century by finally allowing drivers to have neat and well-trimmed beards.

We would like to once again thank all those who took in the process. If you have any questions or concerns, please contact your local union.